Trip overview
Starting at Taipei's Songshan train station we had several kilometers of urban riding until we found our desired road. Then after a couple of relatively low-level mountain passes (small compared to what we were going to do the following days) we arrived at the top of the hill down to Pinglin just as dusk fell. We had great views of the lights on the freeway running through the narrow valley below us and ending in a tunnel on its opposite side. We rode down the hill and stayed at a guest house near the river. Total distance for the day, just over 40km.

We hit the road early the following morning and were up over the pass to Yilan County where we paused to take some pictures. If the weather is cooperating it is possible to see Turtle Head Island from here. Then it was downhill and over the plain into Yilan city for breakfast. Afterwards we headed up the river valley towards Lishan. The road is a steady but increasingly steep upward gradient. We first passed by watermelon fields planted in the flood plain of the river below the road, then through cabbage fields stretching across the entire valley, you've never seen as much cabbage beforei your life. We arrived early in the small, mostly aboriginal town of Nanshan (elevation approx. 1,150m), where we ate dinner — consisting of mostly local cabbage — and had tea and beer with the local guest house owners. Distance covered that day: 115km.

The following day we left early again and made it all the way to Lishan before stopping for breakfast, this is quite a tough section with several hundred metres of ascent lost. After this we continued uphill and eventually through the tunnel to Dayuling. After a snack and a rest we did the steepest part which is from Dayuling to Yuling (Hehuan Mtn pass), arriving at the elevation monument (3,275m) by late afternoon, just as the sunny sky started to cloud over. We were lucky to have some sun at the top; normally, high mountain tops completely fog over in the afternoon during the summer. From there it was a downhill ride all the way through to Wushe where we found another modest guest house. We covered 120km of steep mountain roads that day and felt it the following morning, but from here it is mostly downhill.

The last day of our trip started on a downhill from Wushe to Puli, then west. The group turned southwest and cycled by Sun Moon Lake and then to Ershui where we got on the train. On that, the final day, we covered a distance of about 94km.

Weather & road conditions
The weather conditions during our trip were excellent. Luckily we did not encounter any strong rains, which are very possible at this time of the year (July). We did this trip in early July so the heat at low elevation was intense, always above 30 C with high humidity. Higher elevations (about 500m and above) ranged from warm to cool. The downhill from Hehuashan to Wushe could be classified as cold since a very dense, moist fog came while we were cycling. It was all downhill so our bodies were not generating any heat. Bringing a wind/rainproof jacket and some sort of long sleeved shirt would be advisable for the long downhills when riding at high elevations even in the summer. Sunscreen and moisture wicking fabrics are a must. Sun and clear glasses are also advised.

General opinion
Overall this trip was a great physical challenge. It was perfect for a long weekend, with part of the first day and last day set aside for traveling. Weather conditions, although hot, were not impossible to deal with. We arranged to leave every morning at 6am to try and get some distance covered in the coolest part of the day (often before noon). Lots of water is a must. Road conditions are good, but washouts are possible due to the torrential rains that can happen. Most gas-powered traffic was near Taipei, but on the mountain roads there is much less. This narrow road is often one lane wide and usually has a lot of tourist traffic on weekends. We went down this road in dense fog, so lights were important for safety. Accommodation was comfortable and indoors, air-conditionering was available in those locations hot enough to need them. Organization was excellent and fellow cyclists were able to handle the difficult climbs.

I have great memories of this trip. The only disappointment was returning to the hot, concrete city after several days in the very green and lush mountains of north and central Taiwan. 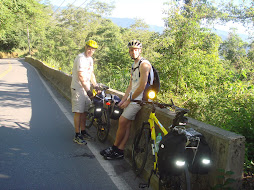 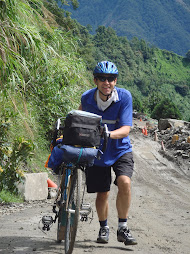